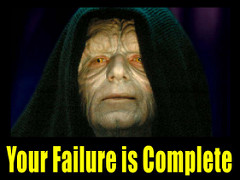 It’s not often that I am really, tragically bad at something these days.

Sadly, that’s not because I’m universally gifted. It’s because I’ve organised my life so that I don’t have to do the things I know I’m really, tragically bad at. I outsource my bookkeeping, for instance, and I gave up on trying to do the splits years ago (that was a life goal for a while, but I’m just not bendy enough).

It’s also because I don’t often – given my advanced age and how busy I am just getting the essentials done – get to try something completely new.

But Child 2 persuaded me to take up an Xbox controller and play his new Star Wars game with him after Christmas, and even HE was amazed and delighted by just how appallingly bad I was.

‘I can’t believe you just crash into the canyon EVERY TIME, Mummy…. no, look go UP, like this….. Oh man, you are TERRIBLE at this!’

And I really was. Within a few minutes we were both crying with laughter at my ineptitude. It’s probably the first time he’s seen me fail so completely at something.

He said to me afterwards: ‘I loved the way you laughed even though you kept dying. You didn’t get cross.’ And that’s when I realised that this was an important lesson. (Not for me. I never plan to pick up an Xbox controller again if I can help it.)

I don’t want to teach him to keep banging away at something he has no talent for and which brings him no particular enjoyment just out sheer bloody-mindedness. That’s not how we achieve our best selves. But I want him to know that when he does find himself being really, epically bad at something, he can choose to find it funny rather than frustrating.

It probably won’t make him any better at it (although it might – we do tend to perform better when we’re in a playful, positive state of mind) but if you’re going to fail you might as well have fun doing it.