Don’t be fooled by the scarecrows 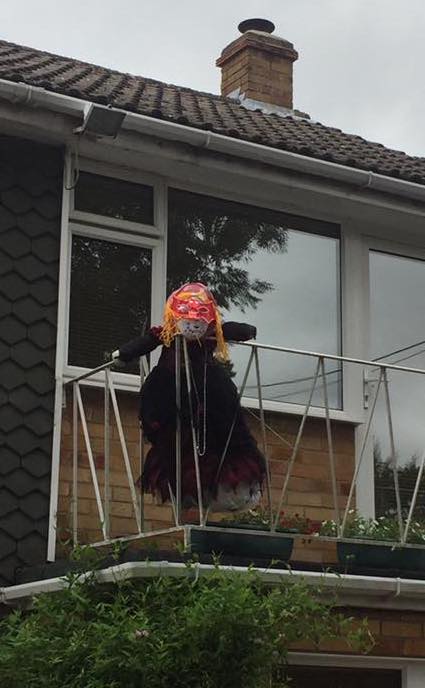 It’s Scarecrow Fortnight here in Bramley: the village is dotted with homemade scarecrows, along the grass verges, hanging off trees, propping up roadsigns, and in our case leaning dramatically from a balcony (if you have a balcony and it’s Scarecrow Fortnight, the only obvious way forward is to recreate the balcony scene from Romeo and Juliet with the aid of couple of pillows, plastic bags and stuffing, old dressing-up frock, a coathanger and a Venetian facemask, right?).

The result of course is squarely in the ‘uncanny valley’. Every time I go into our room I catch sight of Juliet out of the corner of my eye and panic momentarily – there’s someone at the window! And I’ve found it best not too look too closely at her or any of the other scarecrows, sitting there so still, looking so weirdly human-yet-not-human at the same time. It’s a horror film director’s dream.

It’s amazing that even though we can clearly see what they’re made of, they still have the power to creep us out. (And it’s not just me, I checked with some friends. ‘I’m practically driving through the village with my eyes shut,’ confessed one. ‘I hope they go before I cause an accident.’)

The original idea behind the scarecrow of course wasn’t to creep out softy 21st-century villagers, but to keep birds from eating freshly sown seeds or new crops. ‘Better not land in that field,’ they are supposed to think, ‘there’s a human there, look, and we’re scared of humans.’ But for smart birds, a scarecrow isn’t so much  a threat as an advertisement.

‘Down here!’ a scarecrow is really saying, ‘Lots of amazing food, right here, if you have the sense to see that I can’t hurt you.’

It’s funny how so often we build our own scarecrows and then allow them to stop us living life fully. The stories we tell ourselves: ‘I’m not clever/original/thin enough…’, ‘Who am I to….’, ‘People will think…’. On and on they go. Figments of our imagination, created out of nothing, yet we give them the power to stop us in our tracks and keep us small.

They’re just scarecrows. And usually they pop up in the fields with the most glorious crops, the ones really worth having. As Steven Pressfield says, rather more eloquently:

And resistance, like our scarecrow Juliet, might look scary, but it has no real power over us once we choose not to let it.