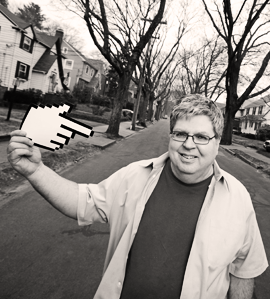 Steve Krug, the guest on this week’s Extraordinary Business Book Club episode, is the rock star of the usability community. And it’s all down to this book: Don’t Make Me Think. It’s a cult classic for UX designers. And the principles it outlines are just as relevant to business writers: we’re all putting stuff in front of busy people, helping them find what they need. And that involves making tough decisions about what to include.

The more stuff on the web page, the harder it is for the user to find the button they need.

The more fluff around your idea, the harder it is for the reader to work out what’s important.

So how do you de-fluff your writing? Steve has this advice:

SK: I think getting help is very important. We think of it as solitary, and we really don’t want to show our stuff to other people, but part of what saved me the first time around… was one of my best friends, who’s an abstract artist. I would take one of these completely manic disorganized drafts of a chapter and we’d sit and have coffee and he would read it. Then we’d talk about it. He would basically say things like, “Yeah, this whole part, I think this just goes on way too long. I don’t think it’s that important a point.” And I could hear that.… Very often I would have some point that I was trying to make and I would discover that it had grown to three paragraphs and then it wasn’t really that important a point. It didn’t really deserve to be. So I’d try and find the simplest way that I could to convey the point again without really fully covering it

A lot of editing is just sort of me wanting to throw stuff overboard. Whether it’s cherished or not, this book’s going to go down if you don’t throw enough stuff overboard. The hard part is when you’ve got stuff that you’ve fallen in love with and you can’t bring yourself to throw it overboard. That’s where you need a trusted reader, just so to say, “I think this part’s a little long, you know?” It’s like… “I’m not sure this point is quite as important as you think it is.”

AJ: “Do you know how long that point took me to write?”

SK: Exactly. “How I think I finally nailed it and now-“

AJ: “And now you’re telling me it’s not important.”

SK: “Just telling me to let it go. Yeah, I’ll think about it. I’ll think about it.” That’s kind of where that goes. But then eventually you do. Part of it is that feeds into then when I’m in the final editing panic, I’m willing to look at that section and say, “You know what, the book will be okay without it.” Once you’ve had a bit of distance. Yeah.

Don’t just focus on what you put into your book, think about what needs to come out, too.