Ely Cathedral is good for the soul 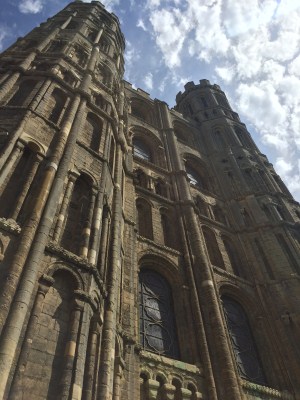 Apparently there’s a statistically significant spike in people running marathons in years ending in a -9: 29, 39, 49, etc. The upcoming new decade is a spur to Get Stuff Done.

I didn’t consider a marathon (that came later), but I did have a bucket list of stuff I thought I should have done by the age of 30, and one of them was going travelling on my own. It doesn’t really count as travelling – not backpacking across Mongolia exactly, but I did manage a solo cycle trip through Cambridge and Norfolk. ‘Very flat, Norfolk,’ as Noel Coward had famously observed, and that sounded good to me. And certainly that first day, cycling up from the youth hostel in Cambridge to a B&B in Kings Lynn, was exactly that. I followed the Ouse for much of the time, and marvelled at the enormous sky curving above me and the neat cuts of the ditches through the fens strobing past.

By the time I was approaching Ely, I was ready for a break. I’d never been there before and was looking forwards to seeing the cathedral. And suddenly, sooner than I’d expected, there it was! It rose magnificent, square and imposing, from the flat countryside around, and I put on a burst of speed in my enthuiasm to get there. And it continued to stand there, equally square and equally imposing, but seemingly no closer, for the next half an hour or so. It was like a bad dream. I discovered aftewards that it’s known as the ‘Ship of the Fens’, as it can be seen from so far away.

Today we drove to Ely, so I was able simply to enjoy the sight of it as we approached. And as I stood beside it and gazed up at those magnificent ancient walls, I thought about those agonising miles so many years ago. And I remembered the moment when I finally arrived and cycled down the shaded leafy path that leads alongside the green to the cathedral front, tired and thirsty and dusty and completely happy.

It’s not changed, you won’t be surprised to hear. I have, but also I haven’t. Ely Cathedral turned out to be just as good for my soul as it was 17 years ago.