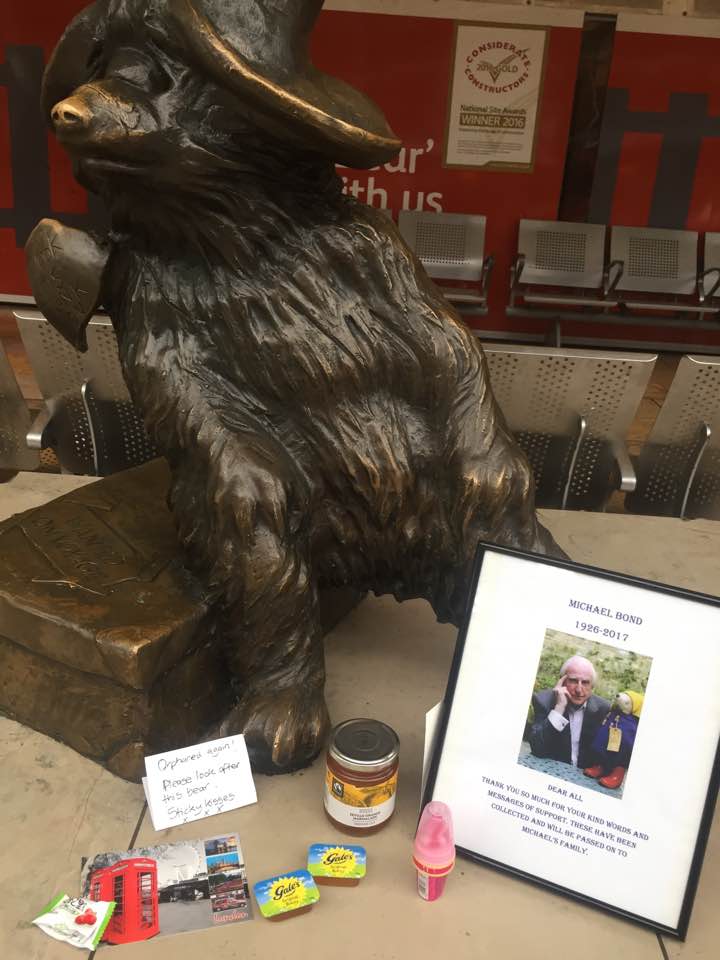 On my way back from London yesterday I caught the Reading train from Platform 1 at Paddington Station and, risking the wrath of the guard waiting to close the doors, I snapped a picture of its famous statue of Paddington Bear, raising his brass nose hopefully to seek someone who will take him home. It’s a beautiful statue of one of children’s literature’s most iconic characters, and there’s always something poignant about his perpetual hopeful shabbiness. Following the death of Michael Bond last month, though, it now seems almost unbearably (pardon the pun) sad.

It seems incredible that a character now so universally beloved could have been turned down by so many publishers (Bond said he could have ‘papered a room’ with rejection slips) before HarperCollins finally knew a good thing when they saw it and published it in 1958.

My favourite quote comes from Michael Hordern, who narrated the Paddington cartoons of my childhood, and who was quoted in Bond’s Guardian obituary as saying that ‘his most challenging roles had been God, Lear and Paddington Bear.’

Why is he so loved, and why was he so hard to voice? There’s something simultaneous innocent and wise about him, and his curiosity, optimism and enthusiasm for life perhaps show us how we’d like to be.

Michael Bond himself said of Paddington:

‘He isn’t me, but I wouldn’t mind being him – he’s never put down or deflated. He has the naivety of a child and the sophistication of an adult.’

This is the very best kind of children’s literature: characters that stay with us and grow with us until we understand finally as adults what they’re telling us about life and about ourselves, what we always knew as children but couldn’t articulate.