I heard today about a company doing some really typical 21st-century business stuff. The founder noticed a gap in the market for a healthier version of a popular processed food, tapping into the current interest in clean living, exercise and healthy eating. He collaborated with an established partner to get his new product  off the ground, and crowd-sourced the name, a portmanteau neologism à la chillaxing or Pinterest. To promote his new brand he engaged in an innovative bit of content marketing with a geolocation angle.

So far so absolutely standard, right? Except this isn’t a 21st-century company at all: the entrepreneur was Richard ‘Stoney’ Smith, who in 1887 patented a process for treating wheatgerm which meant it could be added back into flour to enrich it without going off. His partner was millers S. Fitton & Sons of Macclesfield, and the product was Hovis bread. The name was the result of a national competition: student Herbert Grime suggested it as a contraction of hominis vis – the strength of man. 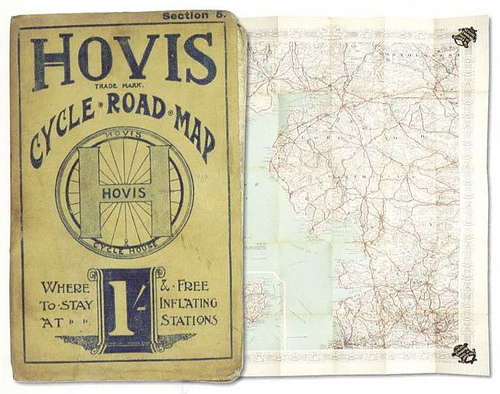 And in 1899, the company published a series of branded cycle maps of England and Wales, listing Hovis-serving hostelries. You could tell you’d reach the right place because each inn had a plaque featuring the Hovis ‘H’ on a cycle wheel.