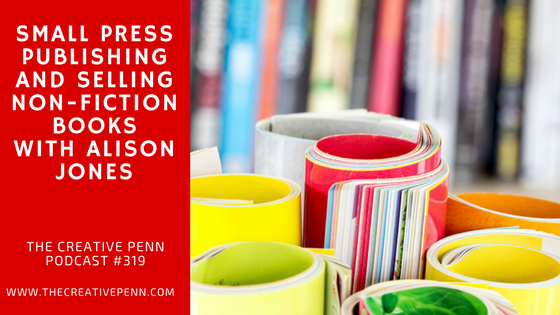 The first podcast I ever listened to was Joanna Penn’s The Creative Penn. It’s about writing, publishing, innovation, and business development. What’s not to like?

It’s still the one I load up first on Stitcher before I go for a long run. And it was the one that most formed my thoughts about how to go about setting up my own podcast last year.

I invited Joanna onto my show of course, right back when it first launched in April 2016 and we were chatting at the London Book Fair.

‘I’m not being funny,’ she said, ‘but ask me again when you’ve done 15 episodes. It’s sort of a rule.’ Lots of people launch podcasts, not everyone keeps them going, and if you’ve taken the trouble to record a couple of interviews that never actually air, you start to get a bit wary.

So when I hit episode 15 I got back in touch, and Joanna duly came on board and did a superb interview on author mindset. That was a pretty special moment: not only an unofficial milestone marking a podcast that would stay the course, but also getting to speak to one of my absolute heroes of writing, publishing and podcasting.

Today marks another special moment – Joanna invited me onto HER show (which has rather more listeners and reach than mine, having started in 2009, before podcasting was even a thing). It was fascinating being on the sharp end of the interview, and I learned a lot in the process.

(It was also quite sobering noticing that I was episode #319 – and there’s me congratulating myself on pulling together Episode 60, the ‘best bits’, this week.)

Have a listen to Joanna Penn and I talking about where publishing’s going, why print works so well for business books, what it means to be indie, and some thoughts on marketing and selling books. Or you can see the video here (and marvel at how Joanna has the lighting just right and I…. don’t).