The Sneetches and the Fix-It-Up Chappie 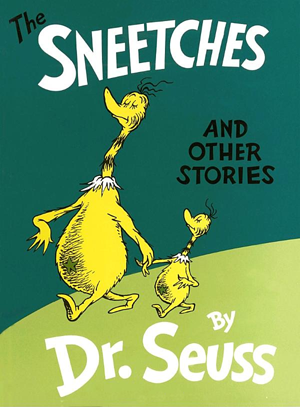 A long old journey down from Manchester to Hampshire today, most of it in freezing fog. Three things made it more bearable:

One of the programmes that I most enjoyed was ‘The Science of Dr Seuss‘, in which Robin Ince explored how the famous children’s writer has inspired scientists over the years with his playfully curious and thought-provoking verse.

I thought I knew every Dr Seuss book going, but I was introduced to a new one in the course of the programme: The Sneetches, a story published in 1953.

There were two types of Sneetches – those with stars on their bellies, and those without – and (of course) the former looked down on the latter. Enter Sylvester McMonkey McBean and his Star-On machine, promising starless Sneetches the opportunity to have a star applied to their belly – at a price.

But as plain-bellied Sneetches start proudly sporting their stars, those born with stars are dismayed. Sylvester McMonkey McBean has the solution: his Star-Off machine will (at a price, of course) remove the star, and thus make them special again.

Sylvester McMonkey McBean continues to charge the Sneetches to have stars applied and removed repeatedly, until noone can remember who originally had a star or not, and they have transferred every last penny of their savings to him. At which point he leaves, laughing at their stupidity:

Then, when every last cent of their money was spent,
The Fix-It-Up Chappie packed up. And he went.

It’s a beautiful allegory against discrimination and racism – and it was originally intended as a satire against anti-Semitism.

But there’s another lesson in there, I think: McBean is the worst kind of entrepreneur, of course, cheerfully fleecing people by exploiting their fears and foibles. The Sneetches finally realise that – star or no star – they were all just Sneetches and perfectly fine just as they were. I wish all the young women I see falling for advertisements for straight hair (if they’re naturally curly) or curly hair (if they’re naturally straight) or thinner thighs or brighter eyes or bigger boobs or tighter buns would just focus on being their brilliant selves rather than wasting their time and money on modern day McBeans.

…the Sneetches got really quite smart on that day.
The day they decided that Sneetches are Sneetches.
And no kind of Sneetch is the best on the beaches.