This is what goes into a successful book

One of my most brilliant publishing buddies is Bec Evans, head of innovation at Emerald Group and co-founder of writing app startup Prolifiko (and also a graduate of my 10-day Business Book Proposal Challenge with an offer from an agent on the table, but that’s besides the point).

Today she shared this superb piece in the Guardian, which uses the data and insights captured by Prolifiko to explore the writing journey of Wyl Menmuir, author of the The Many, which made the long list for this year’s Booker Prize. You can read the whole article, and I thoroughly recommend you do, but these were the things that particularly stood out for me from what it uncovers:

Technology can help or hinder you, and will probably do both at different stages

Use it consciously. Menmuir used the Proliko app, of course, but he also used the SelfControl blocker to stop himself wandering over to Facebook. As he admitted of his Facebooking/Twitter/Guardian crossword habits: ‘I’ll pretty much do anything other than write because most things are easier than writing.’

You do it by doing it

There’s a lovely quote from his notes on Prolifiko: ‘This is now more about grit than writing… Can’t really see where I’m going with it at the moment.’ Sometimes it’s a beautiful in-flow experience, most of the time it’s just showing up.

You will doubt yourself

If you’re writing, you’ll almost certainly be riddled with self-doubt. It’s par for the course, and it shows a) that you’re human and b) that this matters hugely to you. Both of which are Good Things.

There are two big dips on Menmuir’s timeline (which doesn’t bear much resemblance to his original schedule, by the way – another comforting point to note). One of them is immediately before he completed the novel. Isn’t that interesting? 99% of the way there, and suddenly it all grinds to a halt. The article doesn’t say, but I’ll bet that’s what Steven Pressfield calls Resistance. ‘It takes balls of steel to ship,’ comments Pressfield, and you know he’s right.

A fascinating insight into one author’s journey that shed an uncomfortable light on my own (let’s just say I’ve downloaded SelfControl). I’d love to hear what it brought up for you. 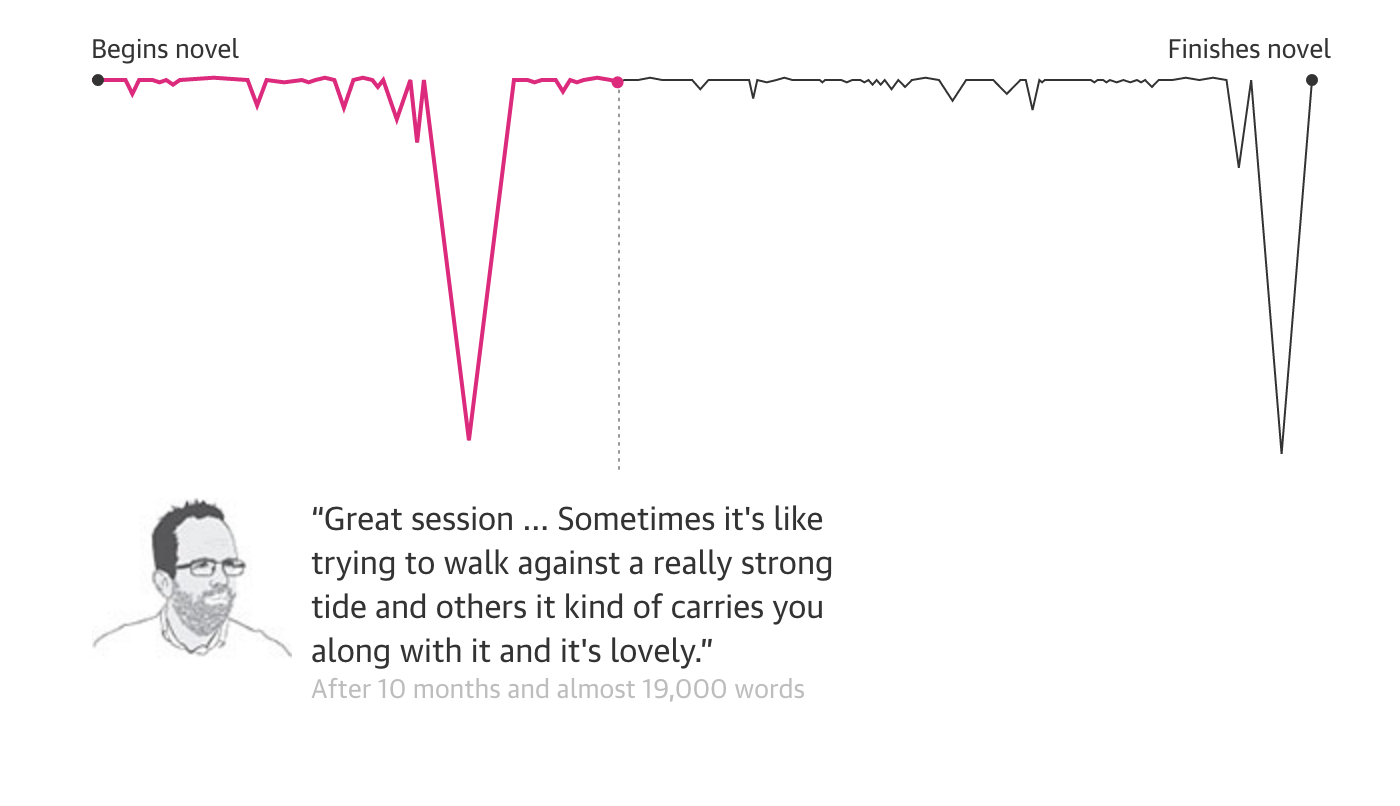