Putting my full Table of Contents online for comment felt terrifying at the time – like standing naked in Tesco – but has proved more helpful than I dared hoped for lots of reasons: accountability, visibility, content development and engagement to name just a few. (The Tesco gig would be effective in terms of visibility and engagement I suppose, but of a rather different kind…)

But one of the most useful things to have come out of it was the redrawing of my underlying model. I’d originally envisaged the underlying structure of the book as an interrelated series of circles, each of the outer circles with to the writing of the book at the centre, with each circles the title of a section in the book, thus: 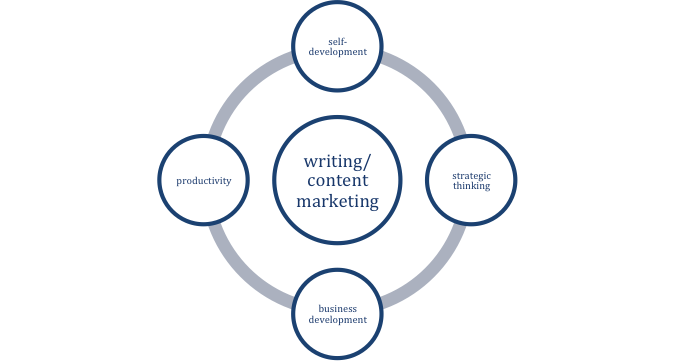 But it became clear from feedback that not only were the headings wrong – they talked about features rather than benefits, for one thing – but this static, contained model didn’t reflect the experience of those who’d worked with me, and saw the process as more dynamic and expansive.

Which made me think of my beloved growth spiral model, a tool I developed myself to help map the evolution of my clients’ book and content strategy against their business development.

It’s based on the logarithmic spiral – described by Bernoulli as Spira mirabilis, ‘the marvellous spiral’ – which is both a mathematical and organic concept. Mathematician Eric Weisstein demystified the hard math by describing it as a progression of lines linking rays, each new section perpendicular to the next ray, creating a consistent expansive pattern:

Organically, it can be found in numerous natural expressions at every scale: the nerves within our cornea, the buds of Romanesco broccoli, the curve of the nautilus shell, the approach path of a hawk hunting its prey or an insect circling a light, the flung out arms of galaxies.

It’s logical yet organic, and for me that makes it the ideal model for the book-writing journey, embracing all aspects of personal and professional growth.

And so I redeveloped the model, and with it the underlying structure of the book, and suddenly it’s not just a neat visual representation, it’s an expression of my vision for publishing and ultimately my way of seeing the world. 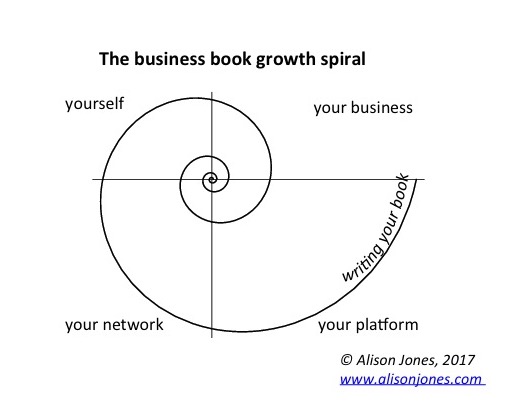 It’s hard to explain just how much this simple shift in underlying model has changed the energy around it for me. I’ve fallen back in love with my book, and the flow from one section into the next suddenly dropped into place. It’s a beautiful demonstration of some of the key concepts in my book: drawing out your ideas, getting feedback, and making the writing your book into an opportunity for some of the best thinking you’ll ever do.