The Inside-Out Revolution: The Only Thing You Need to Know to Change Your Life Forever by Michael Neill (2013, Hay House) 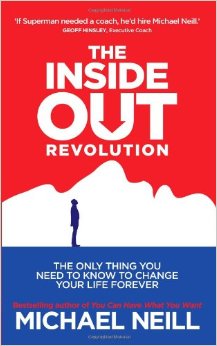 Michael Neill is a success coach: he describes himself as ‘a coach, adviser, friend, mentor, and creative spark plug to celebrities, CEOs, royalty, and people who want to get more out of themselves and their lives’. He is the founder of Supercoach Academy, an international school that teaches people how to coach from the inside out. He hosts a weekly talk show on HayHouseRadio.com, and blogs for The Huffington Post.

Unusually, I think it’s fair to say that this book is for absolutely everyone.

Summarizing this book is more difficult than you might think. Michael Neill outlines the three universal principles that underpin human experience: Mind, Consciousness and Thought. His premise is that our experience of life is created from the inside out: what we experience is our thinking. Which means that we’re only ever one thought away from a completely different experience. Whereas most self-help or personal development texts focus on the need to set goals and take action, the message here is more about recognizing the benign principle underlying our experience – Mind, or God, or the universal intelligence, or whatever name you choose to give it. I told you it was difficult.

The claims of the book are extraordinary, as are the endorsements. (A selection: ‘If you could only read one book in your lifetime, I’d recommend this one.’, ‘the most profound and life-changing message you will ever read’, ‘a beautiful presentation of the only thing you need to know for well-being and happiness’, ‘it doesn’t just talk about transformation – it transforms you as you read it.’… you get the idea.) It’s not a how-to book, it’s a fundamental shift in our understanding of what it mean to experience the world. What the reader does with that shift in understanding is entirely up to them. For some it’s utterly transformational, I’m sure it will leave others unmoved, or simply confused. Look, I think you should probably just read it and see what you think. 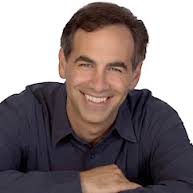 More from Michael himself…

The concepts here are difficult enough when you’re talking one to one to someone: how did you go about communicating these complex ideas in a book?

I can make it sound like it was deliberate, but really it’s more just being aware that that’s the goal and then writing, and seeing how that goes, and then writing more, rather than trying to figure out how to do it. As it happens, my style has always been very conversational, I’ve always wanted it to feel like you were talking to me when I write. So that element was already part of my writing style.

When you say it’s a conversation, did you have someone in mind?

No, I just write, and then it takes shape, it’s a very feedback-laden process, and not necessarily always feedback from other people. I’m a big believer in ‘vomit words, and then you can look at it’.

How did you go about structuring it?

I seem to have a pattern when I write a book; I structure it, I think I know what it’s going to be, then I change it at the last minute and it’s much, much better. I knew I wanted it to be short, and I did think it would probably be 3 sections, 9 chapters, but I thought it was going to be an unfolding from ‘Hey, here’s a simple psychological idea’, then get gradually more and more spiritual until there’d be a big spiritual reveal in the end, in chapter 9, ‘Ha, there’s God, gotcha!’ That was how in my head it was going to go, but I couldn’t get it to work, until I put God on page 1 and then it all flowed. It wasn’t on purpose, it wasn’t even by design, it just wouldn’t work the way I’d outlined it. I played with different things, and then suddenly when I put the Jesus-as-carpenter story in, boom, the whole thing made sense.

I think I have a healthy respect and disrespect for structure. I’m working on a new book now, I have it outlined now, I have the chapter and section structure, but I’ll be very surprised if the finished book is more than 50% of this.

[Structure] is a tool to begin to hang content off. Knowing that I have permission to change it as I go makes the writing easier.

I love that the spiritual is so important here and in the epilogue [The Life Coach and the Mighty Tree], you pull in some of the chewiest questions of theology – where did that come from?

I think it would be a shame to come away from this book thinking you’ve got it. This is my own experience, I think I get it, then I see a whole different level. So for me, this story does that: ‘Yes, you do get it, but there’s so much more.’

I’d written that as a separate piece, but everything I write comes from the same well.

Did the act of writing the book change you in any way?

Oh it always does: it’s one of the reasons to write, as far as I’m concerned. People use ‘you teach what you most need to learn’ as an insult, but I actually think it’s a strategy. I’d been teaching this stuff for 7 years when I wrote the book so it wasn’t new to me, but I knew that writing it would force me to a new level of clarity. And so it did, but funnily enough I had the biggest insights when the book was being read by some of my mentors, because they were able to point out some of the inconsistencies I hadn’t seen.

How do you see the book working with your business ?

It’s been part of the evolution. Each time a new book comes out I have an image of walking towards the end of a room which has a curtain, and when I pull the curtain aside I don’t know whether I’m going to see more of the same room, whether it’s a new room, or whether I’m going to fall into an abyss: it opens up the unknown at a new level. As it’s happened, this book has opened up a field: it’s not just my business this book has affected. That was deliberate but unintentional: I was aware that that’s what it was doing, but I wasn’t doing it in order to do that. I had to make a deal with myself that if everyone else in the field hated the book I was still going to write it. A book has to come from a deeper place than my ego if it’s going to be any good.

For me, I can’t think about it as strategy. If I think about it that way I start writing what might help my business, and that’s death if you want to write a good book. I want a book that is worthy of existence even if it does nothing for me, that can’t be the point of writing a book.

Of course writing a good book will help your business, but it’s the wrong mindset to try to build a business through your book.